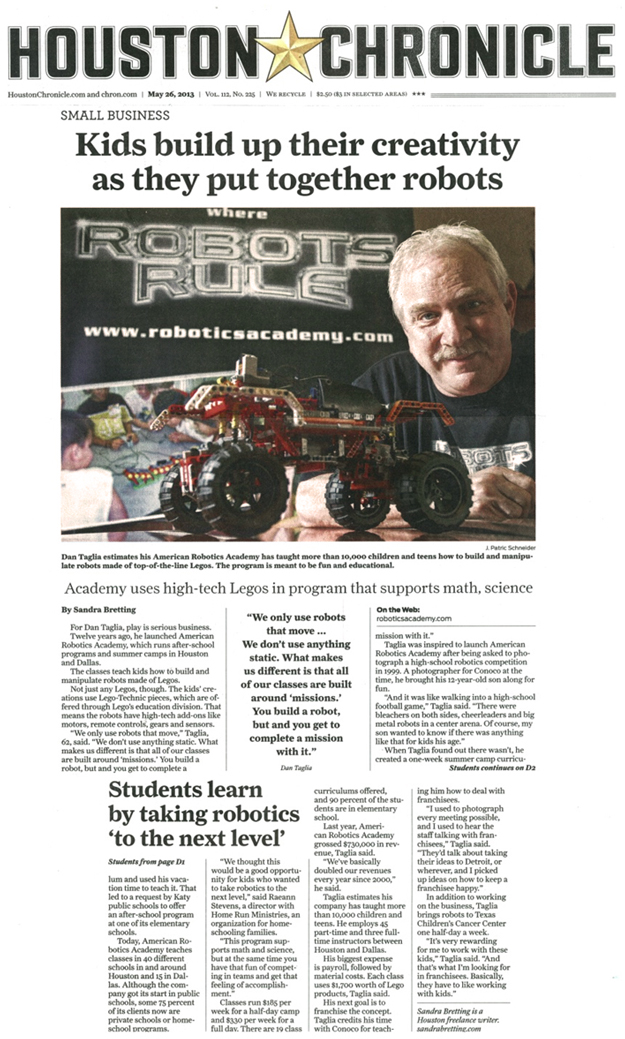 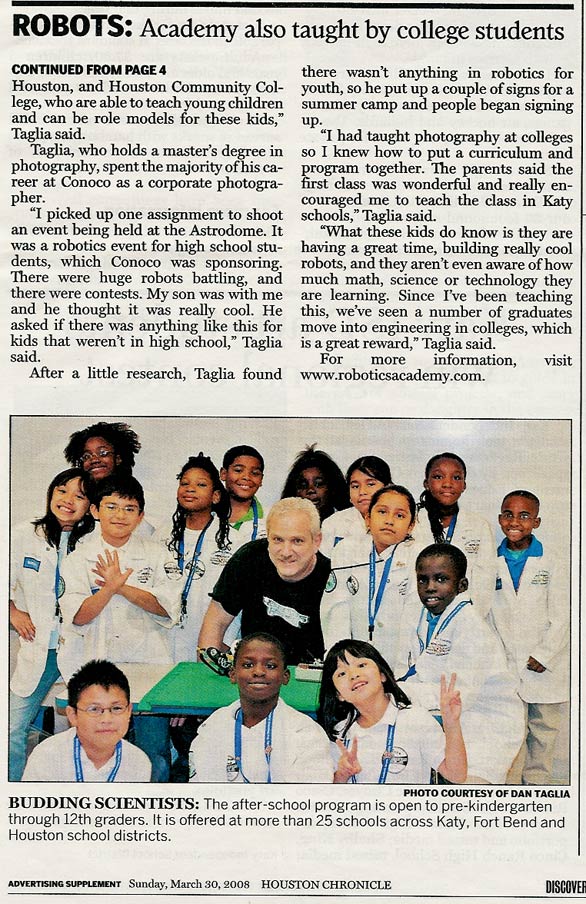 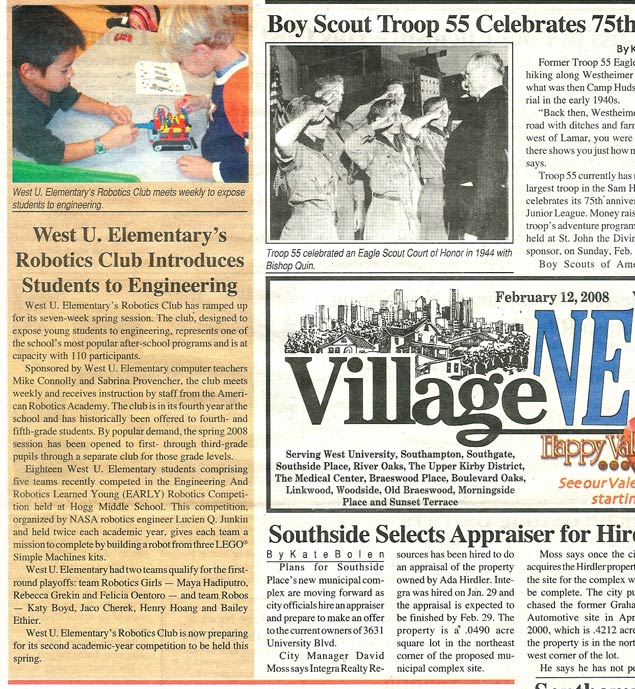 The Katy Chamber of Commerce brought a 4-inch yellow ribbon and foot-and-a-half long scissors to mark the official opening of American Robotics Academy, May 12, an academy where children can learn how to make and program robots. 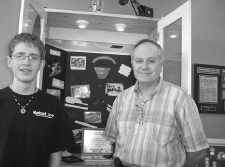 Chris Earley, 14, and father Bill show off a display of Chris' team, 'Dark Mech,' which won first place robot design against 70 other teams.

"Engineers said it couldn't be done,"said Dan Taglia, owner of the academy, "but I went ahead anyway, and let kids find out for themselves how to build robots."

Using the LEGO materials, Taglia began by fashioning robots of his own.

When he decided to teach children how to build robots, he forst took his program to his community church. Parents liked the program so much that he approached some private schools, which set up after-school programs with him.

Taglia also took his program to MD Anderson, and said, "The patients were young, and they were stuck there. When I brought stuff for them to build, their brothers and sisters started building robots, too. I think it helped them get their minds off things."

Taglia had been demonstrating his robots at schools for five years while working fulltime as a photographer at Conoco Oil Company. In the summer, he held 2-week summer camps.

Three years ago, Taglia took three weeks of vacation and held another summer camp. He said, "The classes were almost full.

"I knew I had hit on something, but was unwilling to quit my fulltime job."

However, when Conoco merged with Phillips Petroleum, Taglia's photography position was eliminated. He took early retirement, and opened the brick and mortar business, American Robotics Academy, in December 2002.

In 2003 Taglia held his first summer camp at the permanent building on Clay Road.

"In nine weeks, I had over 300 students," said Taglia, "and people came from Dallas and Louisiana."

Taglia said his robot building program used very little handbook and theory; instead it is a hands-on activity.

"Kids fumble around, have fun, and figure it out for themselves," he said, "The most reading they do is to follow the building instructions."

Taglia's programs always have a theme, so the young people about learn something that is needed in the world.

In the Robotics program for older children, Taglia said that the objective of the "Terrible Toxins" mission was to pick up a representation of a "toxic waste" container, drive it to a safe area and dump it without anybody touching the robot.

"In the 'Wacky Walkers' mission of Robotics Junior, the robot has to save an astronaut who has been stranded on a planet."

The robotics academy is growing, and to meet the need, Taglia held the first training session for science teachers on Saturday, May 15.

The teachers will then conduct robotics camps at their own schools at Galloway School, in Clear Lake, John Cooper School in The Woodlands, and Grace Presbyterian School near Beltway 8.

The Robotics program has four levels. In Level I students learn Mechanics and Pneumatics. In Level II, they program the robot by computer, and in Level III, students add light and touch sensors.

By Level IV, the student builds a totally autonomous machine that runs completely by computer programming. 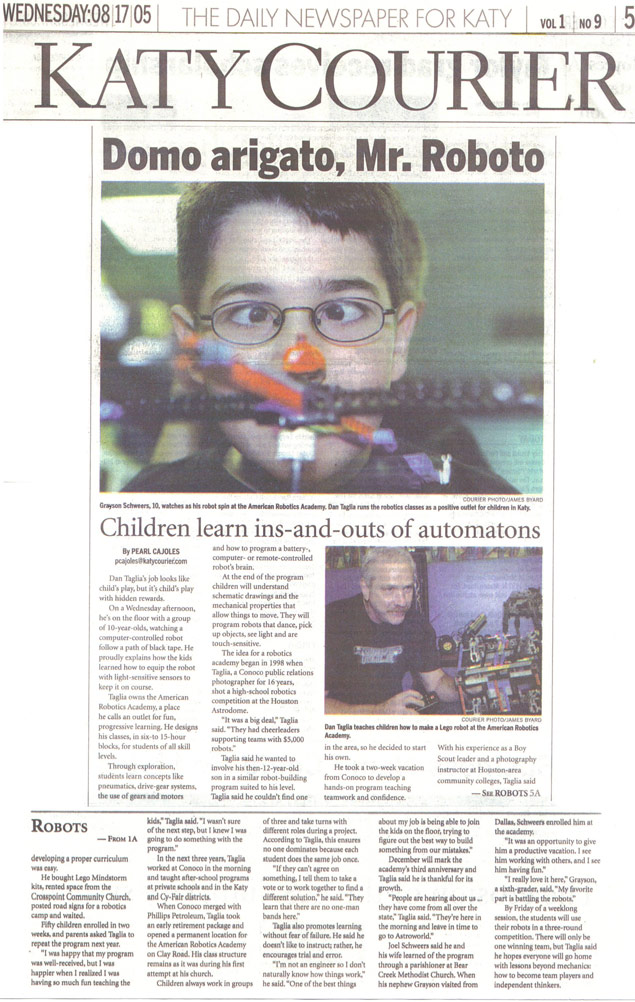 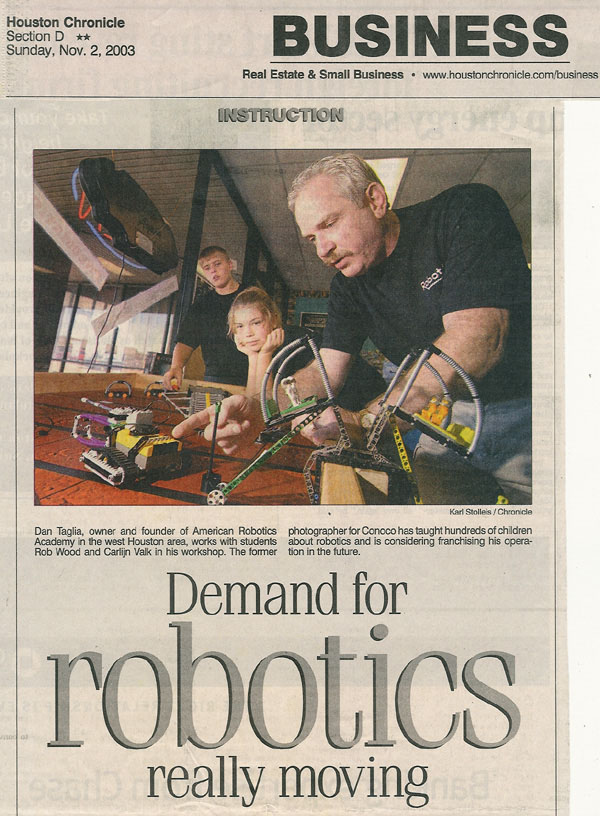 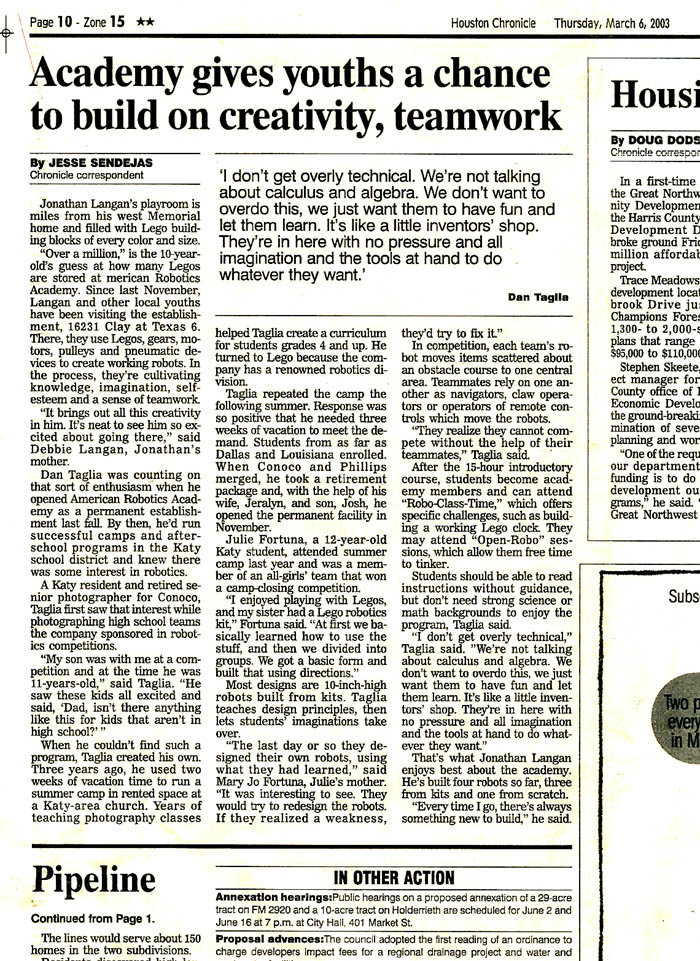 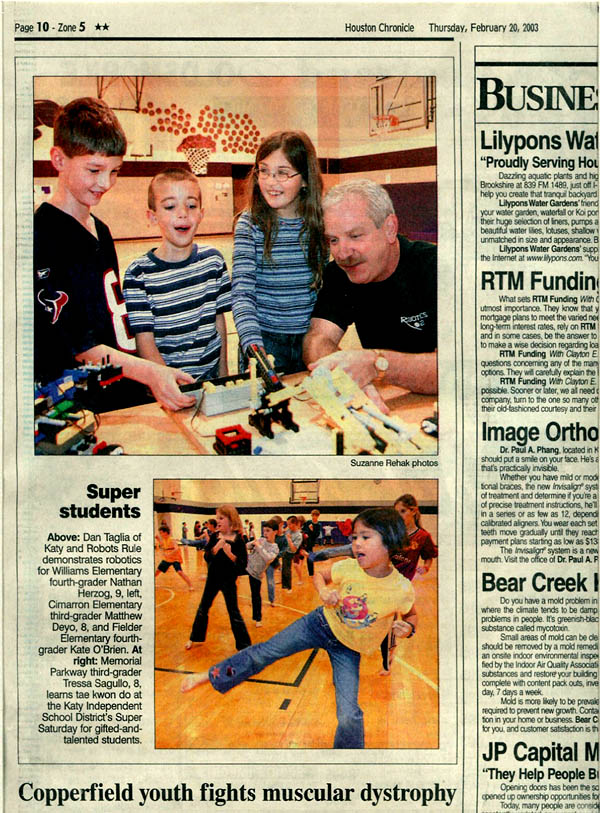 Appearance on Money - Live from the Shows

Copyright © American Robotics Academy. All rights reserved. Site by DARTcreative LLC LEGO® is a trademark of the LEGO Group of companies which does not sponsor, authorise, or endorse this site.